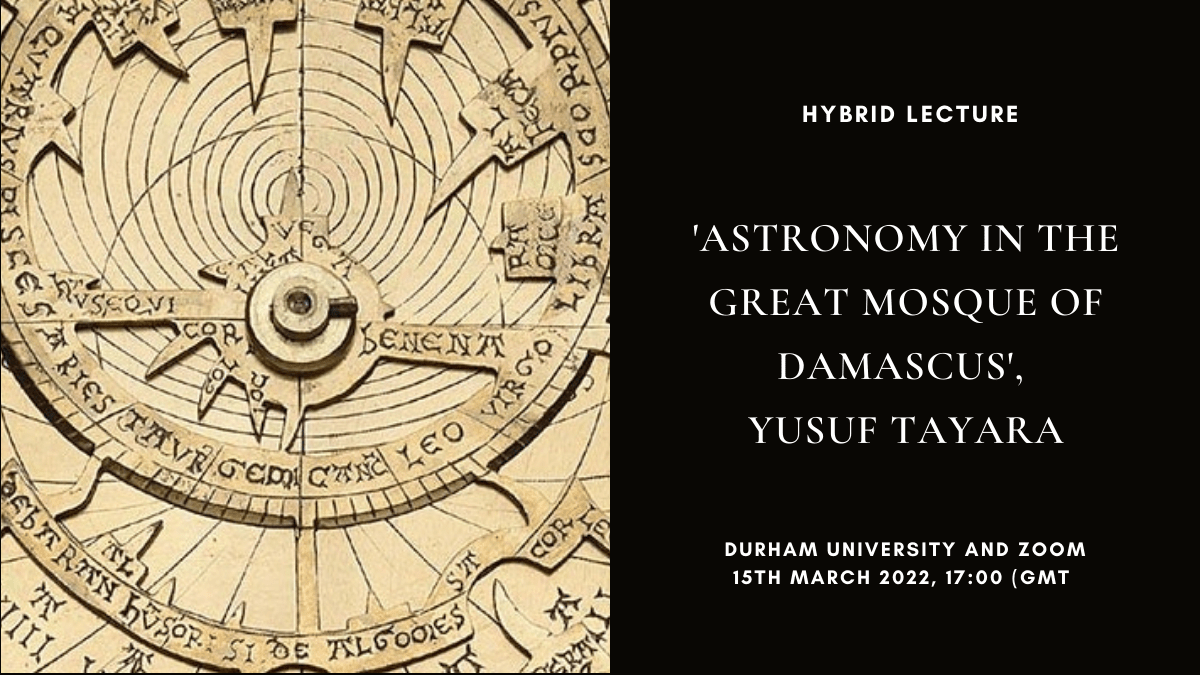 Astronomy in the Great Mosque of Damascus: Towards a Social History of Mamluk Astronomy

Join us at the Institute of Medieval and Early Modern Studies, Durham University, 7 Owengate, Durham, DH1 3HB, on March 15 at 5:00 p.m. to hear Yusuf Tayara of the Oxford University History Department present his research on ‘Astronomy in the Great Mosque of Damascus: Towards a Social History of Mamluk Astronomy’.

Between the late thirteenth and early sixteenth centuries, Syria and Egypt’s Mamluk rulers instituted a range of practical reforms within those countries’ religious institutions.

Among them was the gradual introduction of the muwaqqit, or timekeeper, in the dominion’s major mosques. In this paper, I focus on the Umayyad Mosque of Damascus, one of the oldest continually used religious sites in the history of Islam.

As an institution it has housed some of the Islamic world’s most prominent theologians and religious thinkers. The mosque has also produced one of Islam’s greatest technical astronomers, the muwaqqit Ibn al-Shatir (1304–75).

I examine how the shifting political and social conditions of Mamluk Damascus came to bear on the astronomical practices of Ibn al-Shatir and his fellow timekeepers. I do so by taking a wider view of the Umayyad Mosque as an institution of technical and religious learning, and as a political symbol of Sunni Islam in a period of high political turmoil.

My central contention is that the prevailing mosque hierarchies in the fourteenth century imparted a distinctively practical or folk-astronomical flavour to the writings of technical astronomers in the period. I conclude with some comments on the historiography of astronomy in the Islamic world, highlighting exactly why social histories of science in the Muslim world are generally lacking.

This talk is co-sponsored by the History of Science, Technology, and Medicine Working Group of the History Department and the Institute for Medieval and Early Modern Studies, Durham University.

Register to attend in person here.