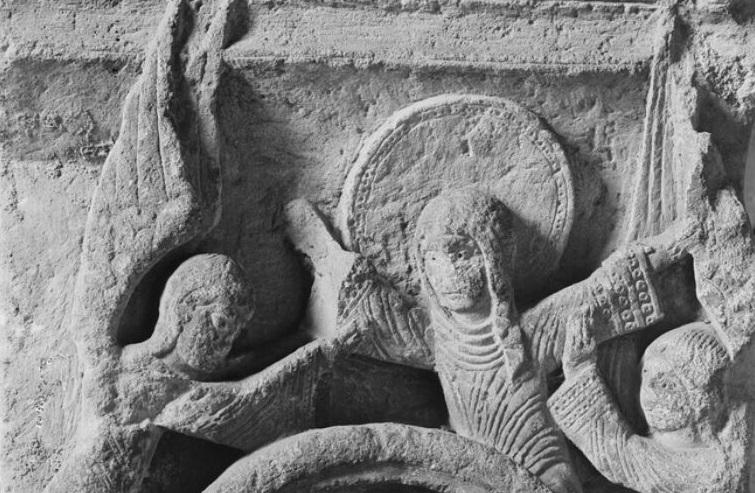 The Guest of the Body: Visualizing Souls in Medieval Europe, 1100-1200

The art of medieval Europe emphasizes the eschatological future in terms that can often surprise contemporary viewers.
Christian anxieties about the apocalypse – the longing for resurrection, the fear of eternal damnation, the hopes of attaining a place in paradise – hinged on the desire for a successful reunification of the bodies and souls of the dead. These two aspects of the self were seen as diametrically opposed in many ways; the flawed, mortal, ephemeral reality of the body could not be more different than the abstract and ineffable qualities of its invisible pendant. In order to represent these contrasts, however, medieval artists visualized the soul in forms that would be recognizable for their audiences, favoring the anthropomorphic soul that could take flight with the assistance of angels.
This talk looks at a series of medieval images, particularly funerary monuments, that reflect on the departure of the soul and emphasize its fraught relationship to the body that is left behind, and to which it shall return. Even as bodies were present throughout medieval Christian spaces – buried in chapels and crypts, or raised as relics in altars and shrines – souls occupied a strange position in between presence and absence, dissolving deep divides between heaven and earth, or between the mundane experience of daily life and the end of days, that distant and yet rapidly approaching frontier of Christian time.
Shirin Fozi is Associate Professor in History of Art and Architecture at the University of Pittsburgh. She is the author of a monograph titled Romanesque Tomb Effigies: Death and Redemption in Medieval Europe, 1000-1200 (2021), which received a Millard Meiss Grant from the College Art Association, and co-editor of Christ on the Cross: The Boston Crucifix and the Rise of Medieval Wood Sculpture (2020).
Fozi has also published several articles on modern collections of medieval art, and her most recent Museum Studies seminar culminated in a student-curated online exhibition called A Nostalgic Filter: Medieval Manuscripts in the Digital Age (2020).
Organised by Dr Tom Nickson (The Courtauld) and Dr Jessica Barker (The Courtauld)
Free, booking essential: tinyurl.com…
0