As an armchair historian who came to the wonderful, hectic sport of Historical Medieval Battle and Buhurt sometime in 2015 (?), I went on a mass “Add Friend” spree to meet and connect with various buhurtists all over the world.

After gorging myself on the many buhurt videos available on various sites, and looking for the best teams to follow on various social media platforms, I took notice of a Ukrainian fighters organization called Ayna Bera (I will put the links to all these Facebook pages at the bottom). As I went through their Facebook posts, I friended many of the people tagged in their photos, one person that I met this way, was Nikolay A from Kyiv, the capital and most populous city in Ukraine. 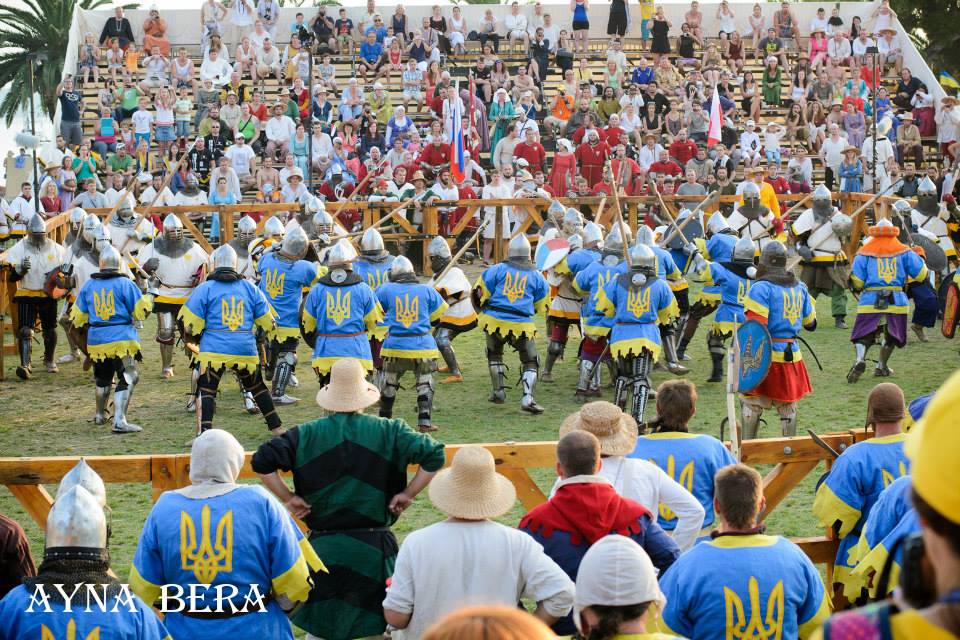 Ayna Bera, here representing Ukraine at Battle of the Nations 2014 in Trogir, Croatia, facing off with their foes in the buhurt nomination. Image from the Ayna Bera Facebook page.

As is usual, I invited all my new friends to my steadily growing Facebook page, and so Nikolay started following the page. He then also invited me to his page; Medieval Extreme, which I then started following.

When I first started offering advertising space on the page somewhere in 2019, Nikolay was one of the first to contact me and from then on we have been working together.

With the invasion of his country in February 2022 I was concerned as to how Nikolay was doing – thankfully, due to the iron will of his countrymen and compatriots, he had emerged unscathed from the invader’s push to, and eventual speedy departure from the Kyiv area. The invasion did not hamper his efforts with Medieval Extreme though, for as soon as the workshops that could do so (as some were damaged or destroyed) were back to producing their goods, he continued to spread the good word of buhurt, and of Ukrainian craft and creativity.

As he has been a longstanding friend of the page, it only made sense to boost the goods he had to offer even further. Every purchase of goods from Medieval Extreme helped and will continue to help the hard working and passionate artists, crafters, builders and fighters rebuild their lives as much as they are able to. Every little bit helps.

He has been an ardent supporter of my various endeavors over the years and I believe that he will continue to do so in future – and I intend to do the same for him and his brand.

I intend to visit some day and grow the relationship even more. Until then, I wish them a speedy victory!

Go show them some support, you can follow them at the following links: